(No reviews yet) Write a Review

Kiwiana inspired pictorial socks featuring imagery of iconic New Zealand native flora and fauna, such as these historic huia curled around these sox. These make great gifts for family and friends here and overseas, because they are lightweight and low cost to post! Send us a message or choose a different delivery address to have these shipped almost anywhere in the world!

OSFM One Size Fits Most 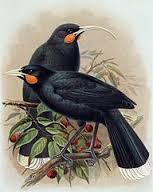 The Huia belongs to a family found only in New Zealand, a family so ancient that no relation is found elsewhere. Only the Moa and the Kiwi are likely to be more ancient. Before the arrival of Europeans it was already a rare bird, confined to the Ruahine, Tararua, Rimutaka and Kaimanawa mountain ranges in the south east of the North Island.

The Huia was a bird of deep metallic, bluish-black plumage with a greenish iridescence on the upper surface, especially about the head, not unlike the Tui. The tail feathers were unique among endemic birds in having a broad white band across tips.

At the base of the bill, on either side of the mouth hung the fleshy wattles characteristic of the family Callaeidae which were bright orange in the Huia. In both sexes the bill colour was ivory white and the legs were bluish grey. In size the Huia were slightly larger than the introduced Australian magpie.

But the most remarkable feature of the species was the marked difference in size and shape of the bill and this difference was so extreme to cause early ornithologists, such as the renowned John Gould, to think that the male and female belonged to different species.

The male’s bill was stout and about 6cm long and curved slightly downward while the female’s was slender, about 8.5 cm long, and very markedly curved downwards. The Huia relied mainly on insects for their food, especially those living in wood or under bark such as the abundant huhu beetle grub, Prionoplus reticularis. It has generally been supposed that the differences in the bills arose as an adaptation to reduce competition for food within the species as the male used his bill as a chisel to break up rotten wood and to widen insect holes while the female used hers as a probe so each was able to obtain food inaccessible to the other. However many scientists are not happy with the explanation as this great difference in form and function has not occurred in any other species.

The Huia, above all other species in the forest, was sacred to Maori. It was, according to Phillips in his Book of the Huia, closely associated with the great chiefs of the land and only chiefs of distinction could properly wear its tail feathers, that is until the coming of the Pakeha broke down the importance of individual tapu and chiefly rank. Also the head and beak and skinned birds were often used as ear adornments and the ancient war plume, marereko, consisted of twelve Huia feathers. The feathers, when not in use, were kept in ornately carved boxes called Waka Huia.

However, the rewards offered by collectors incited Maori to hunt the bird, which were traded and eventually sold to collectors in Europe and the United States.

Sir Walter Lawry Buller, New Zealand’s first ornithologist of note, who was deeply involved not only in the efforts to protect the bird but also in the trade to collectors, reports on one of his many expeditions in search of the Huia; “In the summer of 1867, accompanied by a friend and two natives, I made an expedition into the Ruahine ranges in search of novelties.... While thus engaged, we heard the soft flute–like note of the Huia in the wooded gully far beneath us. One of our native companions at once imitated the call and in a few seconds a pair of beautiful Huias, male and female, appeared on the branches near us. They remained gazing at us only a few instants and then started off up the side of the hill, moving by a succession of hops, often along the ground, the male generally leading. Waiting ‘till he could get both birds in line, my friend at length pulled the trigger.”

However, the final blow to the Huia undoubtedly came with the visit to New Zealand of the Duke and Duchess of York to Rotorua at the turn of the century. At the great welcome given to the royal party by Maori, one of the guides removed the huia feather from her own hair and placed it in the band of the bowler hat of the Duke. This simple act increased the demand for Huia feathers a hundredfold. Long after the royal guests had gone the demands for the feathers grew.